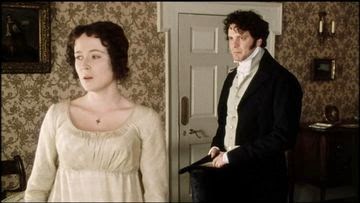 For those of us who like to indulge in a bit of romantic reading from time to time, a well-written proposal scene is like the cherry on the top of the romance cake. It's where the excitement comes in, the satisfaction, or the chance to feel superior to the heroine when they 'clearly don't realise how lucky they are'. A proposal of marriage in fiction can equal one of two things: a) a generic happy ending or b) drama. The dramatic proposals are best - whether because they come as a surprise, end in rejection or are just heart-stoppingly romantic. We all know that marriage should not be the modern girl's ultimate goal, but watching or reading lovely fictional men make heart-felt declarations of love could rank with our ultimate guilty pleasures. Below are five of the most memorable proposals scenes from book adaptations - and yes, it's mostly period drama. Enjoy!

Sorry about the bad quality - only clip I could find. This proposal, as Scarlett puts it, is in very bad taste. She has literally just returned from her husband's funeral and has clearly been drinking. She didn't love her husband, but that's beside the point. There's something bittersweet about this proposal, as for all Rhett's sarcasm he really does love Scarlett, and knows it. Not sure it's all that romantic, but it makes me laugh.

Got a problem? Eclipse is probably my favourite of the Twilight Saga, and although Edward is incredibly annoying at the beginning of the novel (stop trying to control her!) he redeems himself here. The amount of times i've heard Edward called 'gay' because of the waiting for marriage thing is beyond count - but would you call Mr. Darcy gay? Or Romeo? Edward is practically a Victorian and a product of his time. He's just being respectful and staying true to the way he was brought up. Anyway, I love this scene.

This is a powerful scene and although I've heard Ruth Wilson critisised in this role, I think she really did it  justice. The general perception of the Jane Eyre character is that she's a meek little governess, but she's not - she strong and she always makes her point heard (although the 'obscure and little' line doesn't quite work here - she's practically taller than him.) A very romantic proposal, I thought.

This is probably the most iconic fictional proposal (and would have been number 1 if I didn't have my own personal favourite) and I've included both versions since both the 1995 series and 2005 film offer something special (disclaimer: I didn't make the video). I prefer Colin Firth's version myself, as you get a better grasp here of why Elizabeth is so angry. Matthew Macfadyen is just too nice. However, a great use of the book's dialogue and chemistry between the couples in both make for great dramatic moments.

Similar to the P&P proposal in many ways - except for the fact that, unlike Darcy, John Thornton isn't un-gentlemanly. Margaret is so mean to him, but only because her friend is dying and she's un-used to blunt, northern manners. Richard Armitage really did justice to this part, as is evidenced by the army of John Thornton fans this adaptation produced (go on the IMDB page if you don't believe me, it's the only message board I've ever seen where there's more fan-fiction than general discussion) and the acting, from both leads, really makes this scene. Although I wish they'd cut that line about the colour of fruit - what's that all about?