Screen Kisses: The Good, the Bad and... that one in Persuasion 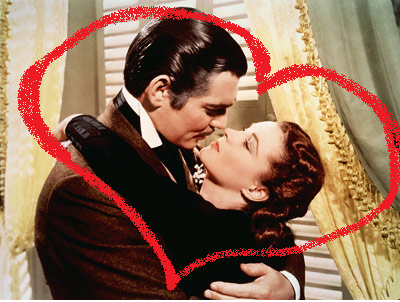 When a favourite or famous book is adapted for stage or screen, one of the most scrutinised elements is always going to be the chemistry between the leads - especially if the romance is central to the plot. The best place to look for chemistry is in a good screen kiss. Yet even if there is a spark, a kiss can still be cringe-inducing if directed poorly.

Below are some of my favourites (if not necessarily the most iconic) as well as some that missed the mark. 14 kisses for the 14th of Feb. They're all from films based on books and all for your Valentine's day pleasure. Enjoy!


Although Ron and Hermione are the real love story of the Harry Potter series and Ginny is the one who gets Harry down the aisle, Harry's first kiss with Cho Chang is my favourite from the films. Rupert Grint and Emma Watson just never had quite enough enough chemistry for me (although I love their kiss in the book) and the Harry/Ginny kiss was, frankly, creepy. This was pitched just right - just the right amount of awkwardness, and the mistletoe is a nice touch.

For those who prefer the Ron/Hermione kiss, here it is too:
(And okay, so I re-watched it. Better than I remember!)


I love Mr.Tilney. Love love love. Who cares about Darcy? I like this kiss for its innocence and unconventionality - and they both look so happy!

I'm not the biggest fan of The Notebook - I came to it late and felt it didn't live up to the hype. Also I couldn't help feeling sorry for Allie's fiancee all the way through this scene. However, despite all that, I've got to admit that this kiss is romantic. Rain always helps.


I know there are a lot of Twilight haters out there and I also know that it's not the best written series in the world. But I like it. I'm not going to apologise for that. This kiss isn't exactly romantic, but whatever you think of the casting (I imagined Bella a bit more smiley...) you've got to admit that these two had great
chemistry.

In a very different ending from the book by Truman Capote, Breakfast at Tiffany's gives us cinema's most iconic kiss in the rain. With Moon River playing plaintively in the background and the finding of the missing Cat, it's difficult to get more sentimental than this - yet it works. Plenty of chemistry, a touch of humour and overall a lovely scene.


From the best version of Little Women by far, another kiss in the rain. I haven't actually read Good Wives myself  (Little Women is usually published as two separate books in the UK, with Good Wives picking up around the time of Meg's marriage) and I really should. But by the sounds of it this film has done an excellent job of making Jo's slightly odd love interest loveable and even (shock horror!) attractive. If you're a fan of Jo and Laurie I'm guessing you won't agree with this one, but I think it's lovely.

She was his new dream! Some might say that the best screen kisses can't seriously include cartoons, but I dare you to watch this and tell me it isn't romantic. There are some great cartoon kisses out there - Beauty and the Beast, Aladdin, Pocahontas - but this is my favourite. Also technically Rapunzel isn't a book, but it's based on a fairytale so I say it counts.

Although Holes is a children's film, it's both clever and funny enough for an adult to enjoy. There's also a romance - the forbidden love between Sam (the black onion seller) and Miss Katherine Barlow (the school mistress) told in flashback. It might not end well, but the early stages of their relationship are lovely to watch.

A classic film and an iconic screen kiss. So much passion and testosterone, we can overlook the fact that Scarlett's absolutely right. What the hell is he doing, leaving her on her own with a sick woman and a baby (and Wade, in the book) to go and fight for a lost cause that he doesn't believe in? I'd slap him too. Well, maybe I wouldn't...

Jane and Rochester are probably my favourite couple in the whole of literature, and in my own opinion, Ruth Wilson and Toby Stephens are by far the best actors to have ever portrayed them. There is chemistry between them and warmth and humour - and I loved the way this scene was directed. So romantic. Wide Sargasso Sea can go jump off a roof.

And now for the bad ones. Missing chemistry, badly directed, or just not interesting - these are the kisses that missed.

Harry and Ginny
(Harry Potter and the Half-Blood Prince, 2009)

Again, I'm sorry Ginny. And I've decided I don't blame Bonnie Wright at all - she was really nice on celebrity Bake-off. It's all the director, and the writers. In the book, Harry and Ginny's first kiss is in the common room, there's a party atmosphere, she's just won the quidditch cup for Gryffindor. This kiss was creepy, pure and simple. "I can stay hidden up here too, if you like???" Creepy.

Alright, so it's not that bad. It's actually pretty romantic. Aragorn thought he'd never see his true love again and here she is - so he dives at her with his mouth wide open. Also her Dad is standing right behind them - personally, I'd find that off-putting.

A bumpy carriage ride is really not the best place for a kiss, if you want it to look good. Couldn't they have just kissed in the church? And if not, could he at least have taken his hat off? The saddest part is, we can't even turn to the 2005 version, as there's no kiss in that at all. No, I'm not counting the alternative 'U.S ending.' That scarred me for life - and it's mostly neck kissing anyway. Here it is nevertheless, for the brave people.

Persuasion may be one of the best Jane Austen novels, but this kiss has got to be one of television's worst.  I know that my preference for the old Persuasion (1995) is unusual - mainly due, I think, to the casting of Rupert Penry-Jones in the new one (the old one had Ciaran Hinds). And I get that. But I can't ignore the terrible ending - Anne running through the streets like a crazy person, and that kiss. Penry-Jones' Wentworth just stands there while Anne mouths at him like a dying fish. It's uncomfortable. To paraphrase Hitch, he should go 90 then she goes 10. You don't make her go the whole hundred!