Based on the Legend: Recommendations for the Arthurian Enthusiast

There are plenty of people out there, I'm sure, that love the idea of Camelot, King Arthur and the Round Table -  and plenty that know a lot about the legend. But however much you know, there will always be someone to tell you that you're wrong. 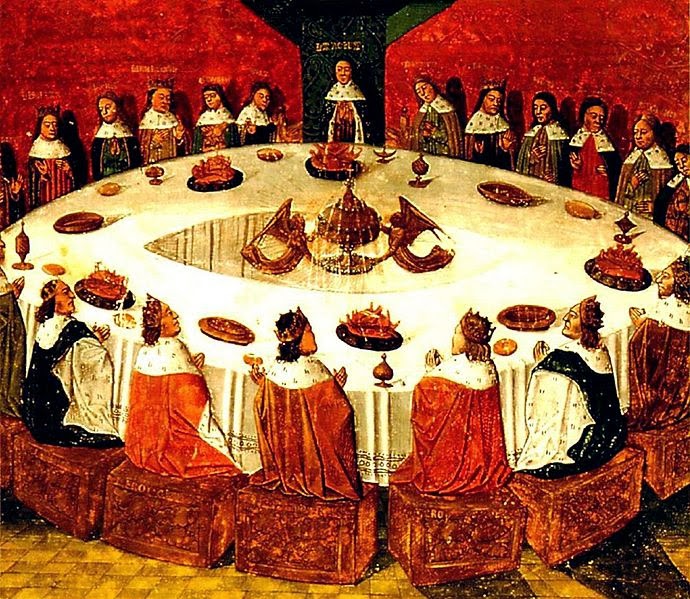 The stories of Arthur are legendary - and this is the problem. You can't just go and read 'the book', as there is no definitive story. People know about Excalibur, Merlin, the affair between Lancelot and Guinevere, but there are so many different versions that it can all get pretty confusing. Never-the less, there are books out there that attempt to pull together the many strands of myth and legend. Below are a few of them, as well as some that feature Arthur, or elements of his story. I've included some screen versions too, to further feed your appetite for all things Arthurian. 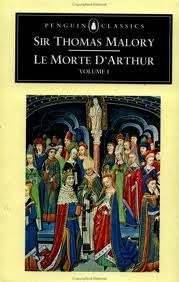 I couldn't really talk about Arthurian literature without mentioning this one. Writing while imprisoned during the Wars of the Roses, Malory was the first to bring together the many strands of the Arthurian myth to make a complete narrative.
If you're going to give this a go, I'd recommend getting a translated version, rather than attempting to slog through the Middle-English (my Arthurian lit. lecturer would say different, but you're reading for fun not education).

Le Morte Darthur is surprisingly readable for a book of that period, but it's definitely not an easy read. The last two tales are where it gets exciting, so I'd at least give them a go. 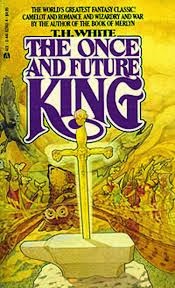 For those who would like to read Malory, but really can't be bothered, I'd suggest this. White has re-created the story of Le Morte Darthur in an easy-to-read style, with like-able characters and plenty of humour. It's a quartet really, with the first book being The Sword in the Stone - you may have seen the Disney film? The later volumes tell the story of Arthur's youth, all the way up to...SPOILER?... his death.

It's good fun, although the narrator sounds like somebody's posh grandad and I don't always agree with his often-voiced personal opinions (the feudal system was a good idea? The Celtic races are all too aggressive and need to learn not to hold a grudge? - okay, so the English part of me says fair enough on that one, but the Irish part is raging!). Just a note: Don't be put off by the first paragraph. It is perhaps the worst first paragraph of a book ever and should be held up as an example of how to drive away your readers. After that it's an easy read - I promise.

In one of her only books for adults, Sutcliff tells the story of Arthur as he might really have been (well, that's the idea) - a Romano-British warrior during the dark ages. The characters are well-drawn and like-able and the ending is as tragic and heart-rending as you might expect. This novel is also part of the series that follows the family first mentioned in The Eagle of the Ninth - a young man of Arthur's company wears the Aquila family ring (Flavius, the son of Dolphin in The Lantern Bearers).

This is a beautifully written novel, but if you don't like descriptive writing then steer well clear. Sutcliff's descriptions are wonderfully authentic and fully immerse the reader in Arthur/Artos's world, but the novel is a very s-l-o-w starter. It picks up about halfway through and is very enjoyable from then on (around about the time we meet Guinevere/Guenhumara). If you can hang on long enough to get to the good stuff, you will be well rewarded. 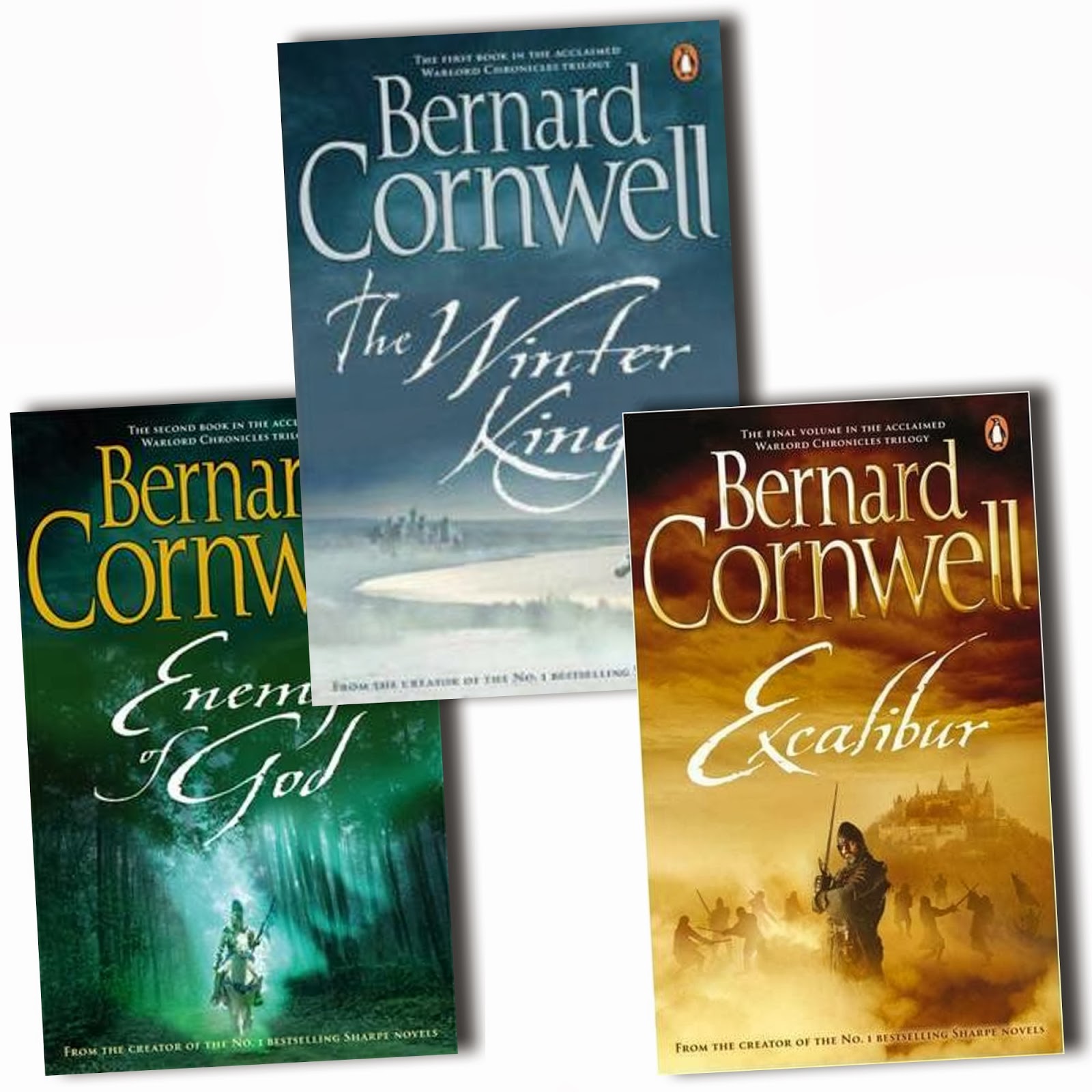 I have recently discovered the existence of these novels, and as a Sharpe fan, interested in Arthurian legend, they are of course now on my to-read list. The trilogy kicks off with The Winter King the story of Arthur's early days as a warrior, and his romance with Guinevere. 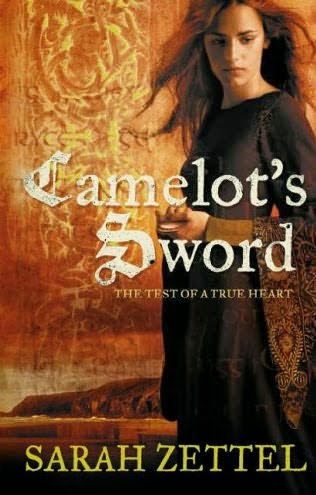 A traditional take on the King Arthur myth in many ways, Sarah Zettel's chronicles are made fresh by the telling of the stories from different perspectives. I have read two, In Camelot's Shadow, a tale focused around Sir Gawain and the woman he falls in love with, and Under Camelot's Banner, the story of sisters Lynette and Laurel, potential love interests for Sir Gareth and Sir Agravain.

I would say that the books (the others being For Camelo's Honour and Camelot's Blood) are predominantly for girls, although any Arthurian fan might enjoy them. Also a previous knowledge of the legend might be useful here, as some elements of Arthurian lore are referred to but not explained in great detail. 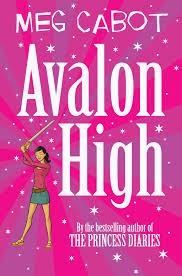 First of all, if you've seen the film wipe it from your mind now. If you've not read the book it may seem like harmless fun, but it's nothing like the book, it really isn't. But back to the point. Meg Cabot's novel would, I think, appeal to any teenage girl interested in the King Arthur legend - and probably some adults too. Avalon High tells the story of Ellie - named for 'Elaine of Astalot' by her medieval professor parents - who moves to a new school and is confronted by strange happenings among her new acquaintance.  Not to give too much away, they all seem to be parallels of characters from Arthurian legend: the mysterious A. William Wagner, his cheerleader girlfriend Jen, his best friend Lance - you get the picture.

It sounds corny, but Avalon High is actually really enjoyable, with likeable characters and an engaging plot. As always, Meg Cabot's writing is addictive and the references to legend add to the fun.

Arthur in Film and T.V

For me, there is no definitive screen version of the King Arthur legend, but here are some of the most famous, combined with my own favourites.

This is... interesting. Setting out to be 'historically accurate' (how you do that with a myth, I don't know) this film fails at both sticking to the basics of the legend, as well as creating an accurate depiction of Celtic Britain. Despite this it's a good film in itself and it's nice to see Guinevere in a more active role.

From Arthur's childhood up until his coronation, this Disney classic is fun family fare. 'The Wart' is sweet and likeable, Merlin is good fun and there's a couple of catchy songs. So it doesn't capture the tragedy and epic proportions of the legends as a whole - but it's an interesting take on Arthur's childhood and the character of Merlin. And that scene with the girl squirrel breaks my heart every time.


Tristan and Isolde is a strange story. Within Arthurian legend it parallels the romance between Lancelot and Guinevere, yet whenever it's included as a part of the main tale - notably in Malory - it seems a bit of a random addition. In the legend Tristan is basically Lancelot, minus the guilt and all his good qualities, while there are two Isoldes - Mark's queen and a random foreign princess that Tristan runs off and marries. This film makes a good attempt at a) making Tristan like-able and b) making the story more straightforward. Yes I know - it would've been better if James Franco could act, but he looks pretty, and the rest of the cast are really very good.

A movie musical based on the stage musical, which was in turn loosely based on Malory's Morte Darthur, Camelot is cheesy and dated and personally I don't think the songs are up to much. It's watchable however  - probably best suited to a Sunday afternoon - and there's a good cast, with Richard Harris as Arthur and Vanessa Redgrave as Guinevere. Camelot focuses on the love story between these two, so of course the ending is a bit depressing, but it gives us a nice, straightforward version of the legend as well as a chance to hear Dumbledore 'sing.'

Loosely based on Vera Chapman's book The King's Damsel, The Magic Sword is an animated adventure that tells the story of Kayley, a young girl who longs to join the knights of Camelot. She has the chance to prove herself when Excalibur is stolen and she must join forces with a blind hermit to search it out and save Camelot from the evil Ruber. Like-able fluff for the kids, with a great score (Celine Dionne's The Prayer was written for this film) and a nice Arthurian feel to it. Featuring the voice talents of Gary Oldman, Pierce Brosnan, Eric Idle, Andrea Corr and Celine Dionne.

What to say about this show? Merlin takes a unique approach to the Arthurian legend and pulls it off with flair. Purists may be put off by the way the stories are played with, but this is real character driven drama and the essence of the legend is not lost. The BBC series (which ran for five series'/seasons) starred Colin Morgan as the young sorceror, in a Camelot where King Uther has banned the use of magic. Bradley James is the obnoxious Prince Arthur, sometime rival, master and friend to Merlin. Despite plenty of laughable moments - for the wrong reasons as well as the right - and some pitfalls along the way, Merlin is a great show for families. There's action, humour and decent(ish) special effects, but what makes Merlin special is the character relationships, especially the comraderie between Arthur and Merlin. The young cast are all great, as of course are the acting veterans, among them John Hurt, Richard Wilson and Anthony Head.

A Warning: Before you fall in love with Merlin as I did, you should know that the ending of series 5 will depress and disappoint you. Merlin was so good, for so long, but the writers failed us at the final hurdle. I'm still not over it completely.

Some other Arthurian possibles: