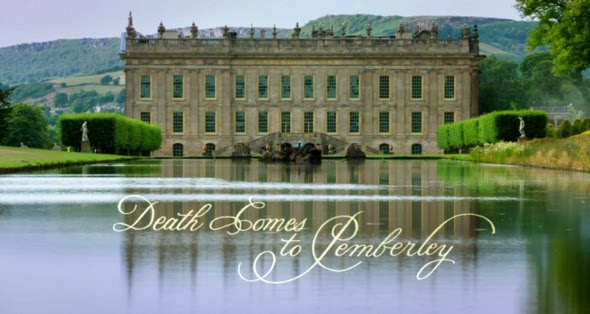 When the BBC announced that one of the televisual events of this Christmas was to be Death Comes to Pemberley - P.D James's ambitious murder mystery and 'sequel' to Jane Austen's Pride and Prejudice - I was, to tell the truth, pretty excited. No, I hadn't read the book but as a Jane Austen fan I was intrigued to see how the lives of Elizabeth and Darcy had progressed (at least in James's imagination) as well as who would be cast in the iconic roles. Yet in a sequel such as this, there was also plenty of room for worry. Death Comes to Pemberley is that strange phenomenon, a sequel not written by the original author - and if I was being cynical, I might call it glorified fan-fiction. How can we know, as fans of the original work, that this new author isn't going to change our beloved characters beyond all recognition, destroying them forever in our minds? It's very possible, but if every fan is like me then they'll read/watch anyway, just to satisfy their burning curiosity. 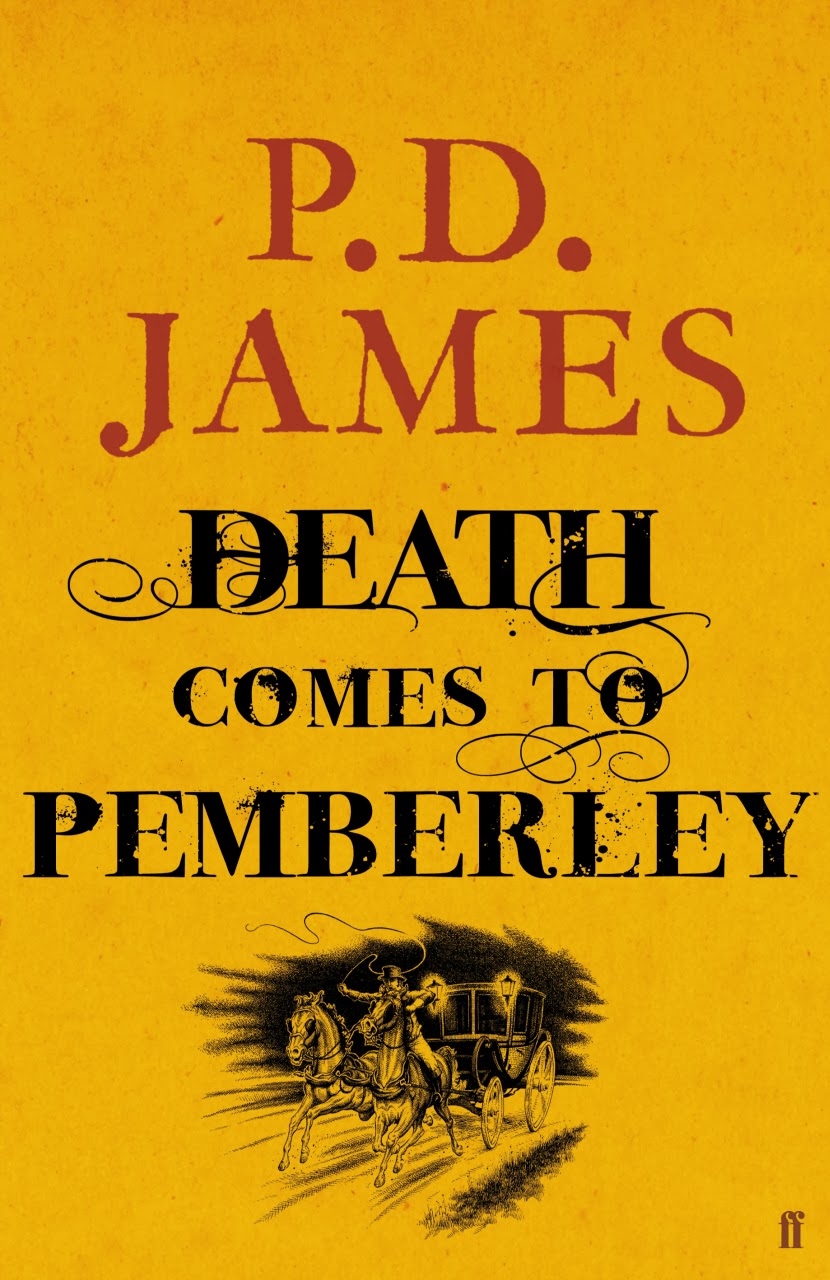 There have been numerous Jane Austen spin-offs in recent years but Death Comes to Pemberley is distinguished by its author, an acclaimed murder mystery writer. And it is well written. The style and language is believably Austen-like, the conventions and customs of the time well-adhered to. But there's something missing. Jane Austen's narrative voice - though perhaps dry and complicated to those not used to the writing of the era - is a warm and humorous one. James captures the style of writing, but the tone is much more serious. And fair enough - this is a murder mystery, not the satirical, romance based fiction that Austen was aiming for. Still, it all felt a little bit flat.

Of course the main attraction of a book like Death Comes to Pemberley is the novelty of returning to our favourite characters at a later stage in their lives. Here Lizzie is settled as the mistress of Pemberley with two young sons, Lydia and Wickham's marriage is having its ups and downs and James doesn't wait long to tell us that Mary is recently married (Hooray!!). This is the stuff we've been waiting for, and now for the family dynamics! My main problem with this book however, was that there was not enough family dynamics. We have barely had a glimpse into the new lives of the characters before there's the obligatory murder, and everything is pretty much put on hold. The planned ball is cancelled, Georgianna's interesting new suitor goes away and pretty much all of the female characters are pushed into the background while we follow the progression of the trial. Yep, back in those days the women would naturally have been kept out of such sordid affairs, so we're stuck with Darcy pretty much all the time, visiting magistrates, attending the inquests etc. Yes, some of it is interesting. Who doesn't love a good trial scene? And we do get to see a good bit of Wickham too. But not much Elizabeth, Georgianna or Lydia. And no Jane, no Mrs. Bennet, or Mary, or Kitty or Charlotte, or Lady Catherine. They're not even at Pemberley. We do get a glimpse of Mr. Bennet, when he comes to visit - and that's better than nothing I suppose. 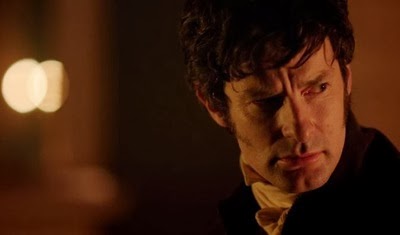 One Pride and Prejudice character who is more closely followed, is Colonel Fitzwilliam. This annoyed me possibly more than anything else. Austen's Colonel Fitzwilliam is a nice guy - nothing special, just someone friendly and amiable, who enjoys the company of 'Mrs. Collins' pretty friend'. For the purposes of the Death Comes to Pemberley plot, he has basically had a personality transplant. And he wants to marry Georgianna?? I'm sorry, but that is wrong on every level. He's her guardian, her first cousin and years older than her.  But moving on. The additional characters were mildly interesting, Sir Selwyn Hardcastle perhaps being the standout (played well by Trevor Eve in the adaptation) as were the new strands of back-story - although the 'black sheep' of the Darcy family being buried in the wood with his dog was a bit strange...
The actual murder mystery was intriguing enough, for me. I never guess these things. However, I imagine that a seasoned reader of this genre would have had an idea of who the murderer was pretty early on - it was a bit like Scooby-doo, there were only a couple of possibles. 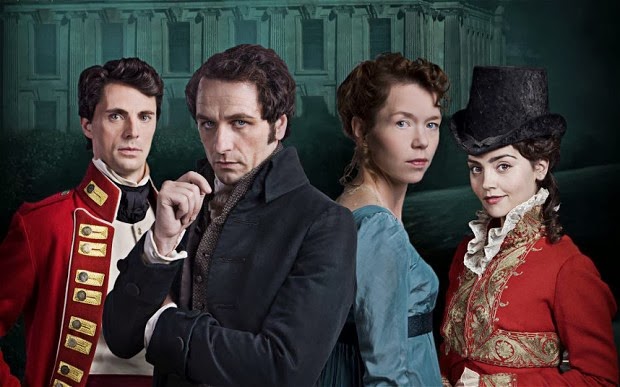 When it came to character, the T.V series tried hard to improve on the original. We saw a bit of Jane, and Lady Catherine and the Bennets were brought in as much needed comic relief. It was a shame they couldn't stay longer, but as they had no place in the original story, their appearances were necessarily fleeting. Darcy and Elizabeth's relationship was also dwelt on further, although not entirely to my satisfaction. I'm just going to put it out there that although overall the casting was decent, it was obvious that Elizabeth was miscast. I'm not going to jump on the band wagon and say she wasn't pretty enough - she is pretty, and after all, Lizzie is only supposed to be 'tolerable' at first glance. But still, Anna Maxwell Martin (Bleak House, North and South) was decidedly wrong. Excepting the odd moment she was too serious, not someone you would describe as mischievous or light-hearted or - if I was being harsh - as having fine eyes. Yes, she's older and more responsible, but surely she wouldn't have lost all her sparkle? Darcy I liked as an actor, it was parts of his script I had the problem with. He was still rude about the Bennets continually - surely he'd have more consideration of his wife's feelings? The relationship was seen as being in turmoil, which is fine, if when it was resolved all returned to normal. It did - technically - but there was a lack of chemistry between the two leads which was hard to ignore.


All of this aside, there was a lot I liked about the mini-series. Great production values and costumes (although why did Lizzie have to wear that same green dress all the time?), Wickham was great and so were Georgianna and Lydia. It was dramatic and although slow-moving in places, I enjoyed the mystery and the way the plot developed.

Overall, Death Comes to Pemberley was a bit of fluff - worth a watch, but not especially memorable. The book is much the same, yet could be enjoyed as a crime novel in its own right and as a look into the Georgian legal system. As a final note, I would mention that if you are going to read the book, look out for a couple of sneaky mentions of characters from other Jane Austen novels - Highbury (Emma) is briefly referred to, as are The Elliots of Persuasion.

The book - Good as a murder mystery, and for the old fashioned style. A bit dull.