The Hobbit (The Desolation of Smaug): Book vs Film

FILM OR TV? - Film
FAMOUS OR OBSCURE? - Famous
BETTER ON PAGE/SCREEN? - If you liked the book then its got to be page

When Peter Jackson announced plans to make a film of The Hobbit, back in the early days following the  LOTR trilogy, the fans resigned themselves to a long wait. A long wait it has been, but one supported by the expectation of something brilliant at the end of these long years. Yet both the first Hobbit film and the newly released Desolation of Smaug were not quite what we were expecting. The new film is exciting, it is enjoyable and the casting couldn't have been more perfect - and that's what hurts so much. The Hobbit has come so close, but it's not all that it could have been. 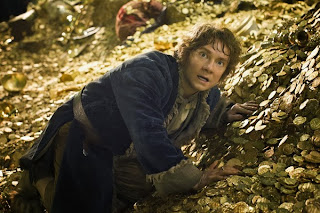 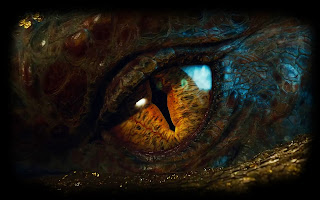 Yet The Desolation of Smaug does have flashes of brilliance. The horribly creepy spider sequence that made me glad I had watched in 2D, the frantic river rapids escape in barrels and - most memorably - Bilbo's first encounter with the dragon.

Benedict Cumberbatch's Smaug is truly terrifying, his voice well disguised and sounding not dissimilar to The Jungle Book's Shere Khan. As Bilbo and Smaug began their riddling talk I realised that I was actually holding my breath - and of course the CGI was great. Well, I say 'of course.' If I'm being totally honest I found much of the effects in both Hobbit films to be almost distracting. The computer animated orcs are less convincing, to my mind, than the costumed and made-up extras of LOTR and whatever new technology they're employing to film both 'Dwarves' and men at the same time just looks odd. The taller characters look almost super-imposed into certain scenes, and in An Unexpected Journey just why does Gollumn look so huge?

Aside from the effects, and at the risk of sounding like an immoveable book purist, my feeling is that The Hobbit gets bogged down by an excess of added material. Instead of focusing on Bilbo and the dwarves, the plot is diluted with added scenes involving random characters that played little or no part in the original story. Even though it's interesting to see how Gandalf spends his time when he disappears off (or it would be, if it was fitted less jarringly around the story of the quest) I really don't want to see countless scenes of 'Azog the Defiler' (who again??) rambling in Orcish to his cronies. It's boring. Also, considering that these films are meant to be about 'the Hobbit' poor old Bilbo was sidelined for most of the film's first act, the focus falling much more on Thorin and even Gandalf - who is absent from this whole section of the book. Richard Armitage is wonderful as Thorin, bringing every facet of the character into focus with the subtlest of acting choices, but Martin Freeman is great too! If the films had focused a little more on Bilbo the whole thing might have been narratively stronger and less of a big old shambles.


Not that I felt all divergences from the book were a mistake. The inclusion of Legolas does make sense, as being the Elven King's son it's likely he would have been hanging around. The King himself was fantastically played and the scenes involving both he and Legolas were interesting in terms of Legolas's character development - I also liked the sneaky mention of Gimli. Tauriel had less reason to exist, but as the book involves no female characters whatsoever I understood why she was included. And her love story could have been sweet, if it had been attempted with even an ounce of subtlety.

Bard, I loved. Laketown was in fact straight out of my imagination, but personally I would have made more of every character there. Stephen Fry, as the master, was also very good. I felt that the time in Laketown dwelt too much on inconsequential action sequences (although I quite liked the orc attack on Bard's house). I wanted to see more of the people - Bard's role in the town, the town's reaction to the dwarves - maybe even hear a bit of the song that Bard quoted? Again, all opportunities missed. 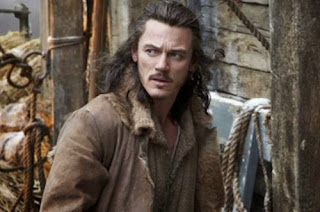 In regards to the ending, even though Tolkien's The Hobbit is a childhood favourite of mine, it doesn't mean that I'm blind to its flaws. I think we can all agree that the ending of the book is rushed (and God knows how they're going to drag out the last few chapters into a three hour final film).
In the novel the dwarves reach the mountain with no plan of action, but -  in praise of the film - at least Desolation of Smaug gave them a kind-of purpose there. Bilbo, the burglar, turns out to be employed to steal the Arkenstone, which will give Thorin the power to take the mountain. And that actually makes sense! I also liked that Thorin and company attempted to make a stand against the dragon, where in the book they just let others do all the work and lay claim to the rewards. Okay, so the attempt was a ridiculous one. It felt as if the writers were making this up out of nowhere - and of course, they were. But I understood the intention behind it and the need for an action packed finale. 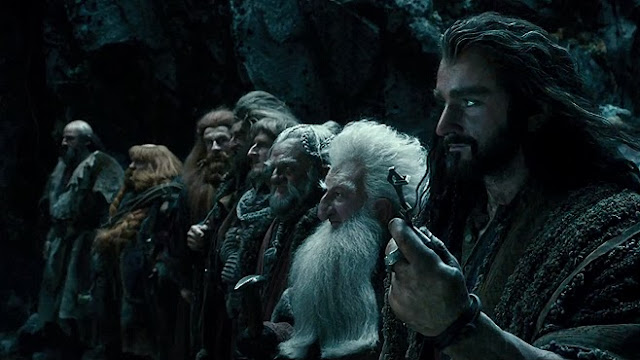 When all's said and done, The Hobbit:The Desolation of Smaug was... better than the first one. With some awesome parts (including an Ed Sheeran song on the end credits!) Yet in the desperate bid to add LOTR style action sequences, the plotting and characterisation suffers badly. I enjoyed this film, as I did the first, but the truth is that if Jackson had made only two films and done a good bit of editing, The Hobbit could have been much better. Lets hope that the large scale battle and challenges to character relationships due in the next film, will bring Peter Jackson back to his best.

The Film - Great animation and casting, but in serious need of editing.