The Descendants: Book vs Film

FILM OR TV? - Film
FAMOUS OR OBSCURE? - Famous, at the moment
BETTER ON PAGE/ SCREEN? - Lets go with... screen.

The Descendants is, I have to admit, not the sort of book I'd usually read. It's an adult book, modern, critically acclaimed and told from the point of view of a middle-aged man. But sometimes you've got to read something literary, so I gave it a go. And I liked it! The Descendants by Hawaiian author Kaui Hart Hemmings enjoyed great critical success for a first novel, a success that was taken to another level in its screen incarnation. With George Clooney as its star the film was nominated for several awards, gaining Golden Globes for Best Actor and Drama film, and an Academy award for best adapted screenplay. But is it an accurate representation of the book? 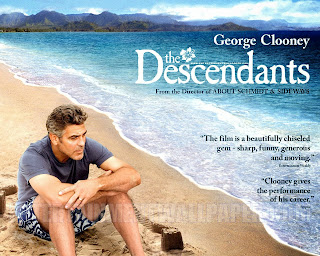 Well, yes it is, actually. There are a few minor things, but as the Academy Award indicates, it's very well adapted.

The Descendants is the story of Matt King an attorney and land baron who is descended from Hawaiian royalty. His adrenaline junkie wife is in a coma following a boating accident and Matt is left to take care of his two daughters - a task that is unfamiliar to him. The book is darkly funny, with much of the comedy coming from the complete lack of control Matt has over his girls: eighteen year old  Alex, a recovering drug addict, and ten year old Scottie, who is messed up in a whole different way. It is funny while being uncomfortable, and I found myself getting infuriated with Matt a lot of the time. Especially when it came to the whole situation with Sid, Alex's friend (just send him home! He should not be there when your family is dealing with something like this! You don't have to put up with it!!) Anyway, no matter how much I wanted to shake both Matt and the girls (and Sid, obviously) they remained stubbornly likeable. It was surprising to me how much I emphasized with the central character, considering he is male and Hawaiian and middle-aged, also stinking rich, a workaholic, a (bad) husband and father and dealing with a whole lot of issues I have never come near to experiencing. But he was very real, and as the story is told from his point of view you can't help but root for him. It's a tribute to the writing I suppose, and I think it says something about Hemmings' characterisation that I got through the whole book before realising that the author was female. And also that I know nothing about Hawaiian names.

(Warning: Some spoilers in trailer)


So, the film. Well, it stuck closely to the story and it was well cast. Reading the book, I wouldn't have immediatley thought of George Clooney for the role of Matt, but he did a great job. In an early scene where Matt is told that SPOILER SPOILER SPOILER they are taking his wife off the life support, Clooney's reaction is subtle yet moving, and he keeps up the good work throughout. Despite his fame, I think that as an actor Clooney is underrated - so it was nice to see him gain some recognition for this. The rest of the cast are great also, there is surprisingly affecting performance from Nick Kraus as Sid, and relative newcomer Shailene Woodley shines as Alex. She has a lot of difficult emotional scenes, yet she carries them off wonderfully. It did annoy me how much she looked like Natalie Portman, but she can't help that. I think it may have been the quality of  Woodley's acting, in fact, that brought about some of the subtle changes in the transition from book to screen. I felt that the film focused more on Alex than Scottie, glossing over the early scenes in the book where Matt is faced with spending time alone with his younger daughter, and discovers that she has plenty of problems. The Scottie of the film is relatively normal, and as a result Matt appears more in control of the situation than his book countepart. I can see why those early scenes had to be curtailed to keep the plot driving forward, but Amara Miller, who plays Scottie, broke my heart with her small scenes towards the end of the film and it would have been interesting to see how she handled the early stuff.

In other casting, I was pleased to see Judy Greer in a role that wasn't 'the best friend' (think 27 Dresses and 13 Going on 30) but got an unpleasant shock at the realisation that the photo of Brian Speer on that real estate advertisment was in fact Shaggy from Scooby Doo. Is it realistic that someone would cheat with him? Really? No, I'm joking (kind of). He actually wasn't bad  - it seems Shaggy can do serious, too. 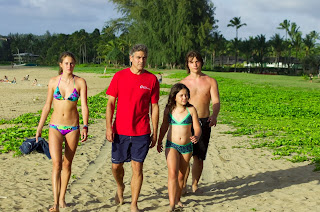 Overall, The Descendants is a great film adaptation of a great book. It was moving, funny, and Hawaii is very beautiful. And that final scene with them all sitting on the sofa, I just cried and cried - I'm not entirely sure why, but I did never the less. I just have one bone to pick. Why, why why did they change the Mum's name from Joanie to Elizabeth? Yes, personally, I think Elizabeth is a better name, but was there a reason behind the name change? It seemed totally random. Like in the first Harry Potter film, where the snake Harry sets on Dudley is changed from a Brazilian Boa constrictor to a Burmese one. It doesn't matter but why bother changing it?? Maybe Joanie sounds too similar to Scottie. Or maybe we'll never know.


Labels: As good as it gets drama Modern stuff quick reads Reviews